We are working fast on the concept for the porcubimmer. This is the basic concept as it stands today. The porcupine quills will most likely be made out of a heavy duty industrial packing foam. It’s strong enough to stand up to the wind and the race, but soft enough not to cause damage to the other competitor’s cars.

Once we get acceptance of our entry, we can start gathering parts and making it happen.

We ate our mascot!

While this may not be 100% relevant to the racing team, I wanted to share my birthday experience just to show we have some creative souls on our team. Plus it’s too cool not to post about!

Yesterday was my birthday, and to my complete surprise, my girlfriend Chrissy arranged a surprise party for me with a bunch of my friends in attendance. If that wasn’t cool enough, Liz and Jen (Andy’s wife and friend) made me an awesome PorcuBimmer cake! 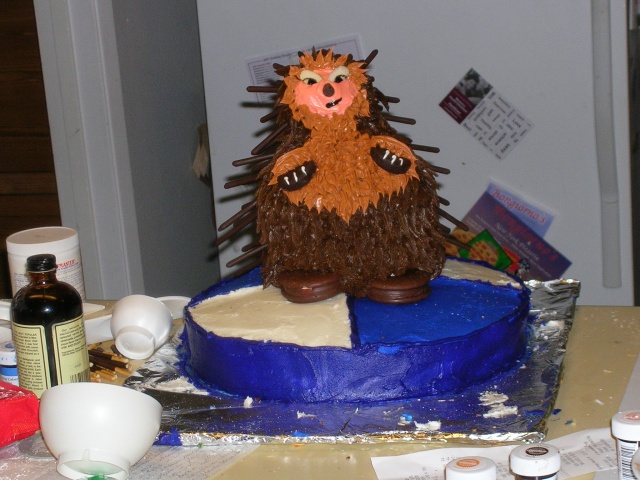 Yes, that is an edible porcupine (complete with Pocky quills!) sitting on a BMW Roundel. Thanks so much to Liz and Jen, my girlfriend Chrissy, and all my friends who attended my party.

Liz and Jeff will be collaborating to do all the decoration on our car, and I’m sure it’s going to look fantastic. Hopefully Jeff will post a blog documenting his ideas!

Last year I drove in two 24 Hours of Lemons race events with another racing team. After proclaiming it was the most fun thing I have ever done with my pants on, several of my gearhead friends expressed interest in getting involved. I started discussing things with them and a couple of fellow , and decided that we were well equipped to give this race a go. And so our team was born!

The first order of business was to find a suitable race car. Initially, we were looking at front wheel drive Japanese cars. Kris, being our resident BMW uber-geek enthusiast, suggested that we look for an old BMW. The rest of the team, in order to rib Kris about his brand loyalty and the stereotype of BMW drivers, responded that we weren’t self-centered enough to drive a BMW. This was followed by the classic joke,

“What’s the difference between a porcupine and a BMW?

With a porcupine, the pricks are on the outside.”

As it turns out, after a couple of weeks Kris found a tired but solid 1987 BMW 325 for $400 that will fit the bill as a Lemons racer quite well.

Knowing that this style of BMW is already a popular choice as a Lemons racer and competition to get into the race is tight, we had to be creative in order to get ourselves a position in the race. While brainstorming ideas for a theme, we had to think of what makes us and our car different from all of the others. Our thoughts then turned back to our previous comments about not being stuck-up enough for a BMW. That’s when inspiration hit: We could have the world’s first BMW with the pricks on the outside! Thus, we became Team PorcuBimmer! Our car will become a giant brown porcupine, complete with large foam quills all over the hind end.

Now to submit our entry!!

I was at dinner with a handful of friends from the local chapter when I mentioned that I was invited to co-drive for a 24 Hours of Lemons team and we were looking for a car. One guy I autocross with mentioned that his family has an 87 325 they’d sell for $500… it was pretty rough, didn’t idle right all the time, shocks bad, needed smogged and registered. I didn’t care about all that… as long as it ran. I went to look at the car and gave him cash on the spot - as a matter of fact, I talked him down to $400 so that we’d have some cash to play with.

I set the (only) key on the dash and proceeded to help the owner take out the Pioneer CD player that was not included with the car. When the radio was out, I realized the key was no longer on the dash. The only place it could have fallen was in the defrost vents. fuck. We tore out the instrument cluster and some dash panels, but had no luck. The owner had an appointment, so I left the car there.

I went back this morning (two days later) armed with some tools, a wire hangar, and the phone number for a mobile locksmith. After pulling out all of the HVAC tubing on the driver’s side (weight savings, right?) I was able to reach in and grab the key. Finally.