Yeah, I know, the race was a week ago, but I’ve been busy as hell. So better late than never. First of all, the pics:

Mike E. made the trek out to Buttonwillow from Pennsylvania to be part of our team and take some epic photos documenting it all. Thanks so much, your photos really captured the event as it was.

Team Porcubimmer’s latest foray into the world of LeMons racing was at the Buttonwillow Raceway last weekend. After coming in 79th and 32nd place in our last two races, we were thrilled to come in 9th place this time out of 95+ competitors! The total tally:

263 laps, for a total time of 13 hours and 18 minutes, and we were 18 laps behind the winner. Not too shabby! This was by far the best LeMons race I have participated in (it was my 5th time), but it was not without drama.

The track didn’t open for tech until Friday, but I decided to make the 5 hour drive on Thursday just in case I had any problems. And problems I had. First of all, I didn’t even make it out of San Diego before the rented trailer blew a tire on the freeway. I have no idea how long I drove with it blown, but unfortunately it was long enough to ruin the other tire on the same side of the trailer, as it had to hold all of the weight of the trailer and the sidewall bulged out and scraped against the inner fender in the process. 2 hours and $275 later, I was on the road again with two new Goodyears.

5 miles down the freeway, I was crawling along in stop and go traffic, when I felt a thump behind me. I looked in the mirror and saw a Jeep Wrangler with its front tires up on the trailer! As I pulled into the emergency lane, I was pulling the Jeep too. I got out, and luckily I had my camera with me. This is what I saw:

I figured the Porcubimmer would be pretty hard to ignore, but apparently not. The Jeep drove up on the trailer, hit the back of the race car, and lifted it up and forward a few feet. The trailer had a bent lip, and the Porcubimmer suffered a crumpled quarter panel, rear valence, and spare tire well. The rear bumper did its job, mainly because we had previously welded the mounts solid. The Jeep obviously took the brunt of the hit and had to be towed. Nobody was injured, so we swapped info and after some help to get the car back on the trailer from my former driver Vince (who was towing his own car to LeMons and stopped to help), I was back on the road, and the rest of the drive was uneventful.

On Friday we set up our pit space at the track near Rich’s RV (which provided some welcome shade and air conditioned comfort). We opted to pay for for a half day practice session to make sure the car was ready for the race. My turn was highlighted by me going off track into the dirt (went a little too fast on my first lap), followed by the car dying and refusing to restart. A tow back into the pits revealed the computer had failed. We swapped in the spare and ran the rest of the day without incident. The car ran great and it was clear the track was going to be fast. We finished off the day by eating at one of the best Mexican restaurants I’ve ever been to (with the biggest burrito I have seen), followed by beers and BS on the lawn in front of Motel 6. Yep, the full Bakersfield experience. Saturday was race day, and Mike was the first driver (he had driven at Buttonwillow before, unlike the rest of us). We were awarded pole position for winning the scavenger hunt, and Mike’s stint was fast but uneventful. I was up next and the car and I ran great. It was a ton of fun out on the track, and surprisingly I was able to pass or keep up with nearly every other car out there. No drama other than me getting a bit sideways in one corner but to my amazement I saved it. Reid was up next, and everything was going fine until the car started sputtering around some corners. It got bad enough that Reid came in to pit. We checked for fuel and spark and found we had both. With no better idea, we decided to swap computers again, which was easy because the spare computer was zip tied to the main unit in the car, so we just swapped the connector over and sent Reid on his way. Everything was fine after that. I think the computer mounted to the transmission tunnel may be getting too hot, so I’ll have to think of a way to move it and keep it cool.

After this, we checked the current race results and were amazed to see we were in 6th place. Ben went out next and ran great until he was spun out by some Sentra (didn’t see it happen, but he got tagged in the same corner which was damaged in the accident during the tow up) and had to come into the pits after getting a black flag. Luckily we had the “Get out of jail free” cards from the scavenger hunt (I taped a “dispenser” on the door for just such an occasion) but we had to swap drivers. Kris hopped in for his stint as Ben tried to shake off the effects of his dirt shower. We checked the rankings again and saw that we were in 7th or 8th place. Since Ben had to come in a bit early, Kris’ stint would be extra long. We wanted to keep him out until the end of the day since we actually had a chance of finishing in the top 10. This made the team particularly nervous due to his thimble bladder which became an issue at our last race, but he was able to hold out until the end and brought the car in unscathed. We finished the day in 7th or 8th (I think). On Sunday morning we swapped tires, gave the car a good once-over, and went out on the track once again. The car ran like a clock in the hands of Kris, then Ben, then Mike. Mike then radioed in that the gas pedal no longer worked and he was stuck out on the track. Thankfully he wasn’t too far from the pit entrance, so a tow truck was able to retrieve him quickly. With the car back in the pits, we learned that the accelerator cable had become disconnected from the pedal. We were thinking of how to fix it when a member of the Formula BMW “Pink Pig” team happened to be walking by and saw the problem. He immediately jumped in our car head first (literally) and fixed the cable with zip ties. Thanks, dude! 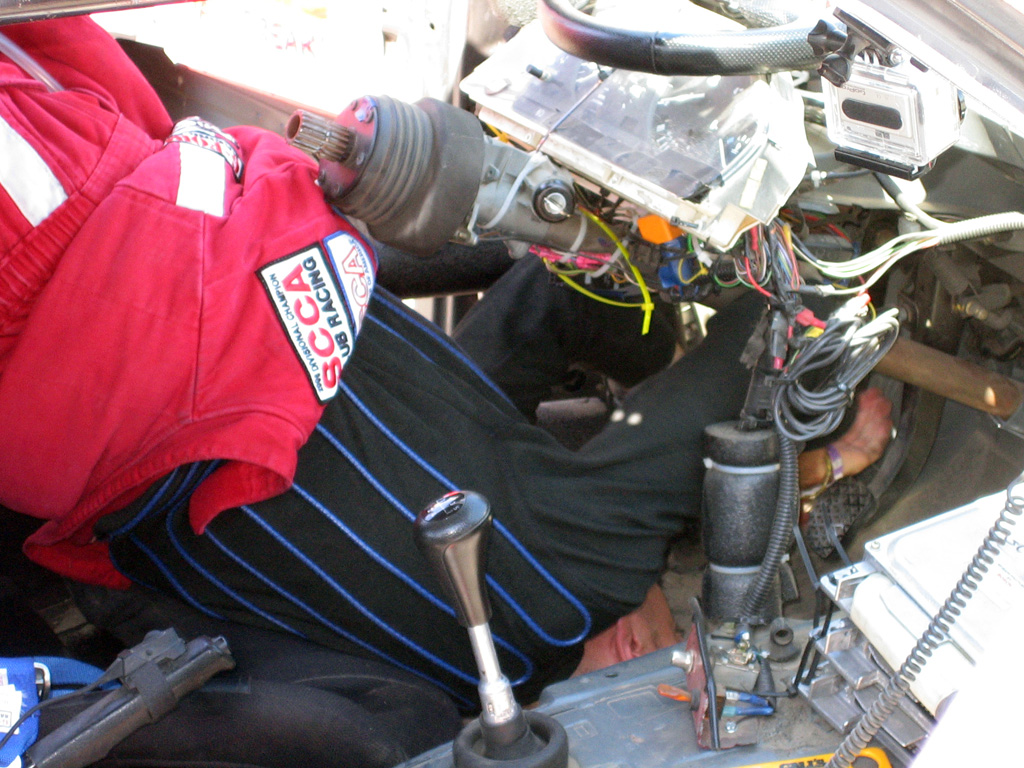 At least we were able to reciprocate the friendly spirit of LeMons helping a couple of other BMW teams by loaning them belts and a guibo. Anyway, with the car fixed, my stint went great, along with Reids, and we took the checkered flag in 9th place!

The last lap was full of drama, with the 1st and 2nd place cars only seconds a part and battling it out for the win. This resulted in the 2nd place Integra flipping upside down which meant most of the last lap was under yellow flag conditions. It was at that point that Reid accidentally jammed the front of the Porcubimmer into the back of the Pink Pig Formula BMW…. yes, the same team whose driver fixed our throttle cable. Sorry guys! At least the Formula BMW guys took it in stride, but once again Reid leaves me with some body repair work to do. Damn you.

Ok, this is a long entry, but I’m thrilled at how well we did. This was the ///best race evar for all of us. We didn’t expect to do so well, especially considering most of the teams ahead of us had full race shops or engineering degrees at their disposal. I had to move my dad’s car out of the garage any time I wanted to work on the car!

So, big thanks to our hot shoe drivers Ben, Kris, Mike, and Reid who kicked major ass out on the track. Major thanks also to our pit crew, consisting of Andy D, Andy R, Don, Doug, Mike E, Rich, and Scott, for keeping things organized and sticking to the schedule. Hopefully I didn’t put the “dick” in dictator! Finally, thanks to my dad for all of his help working on the car, and to my patient and supportive girlfriend Chrissy for understanding why I spent every weekend for the last 2 months wrenching on a POS BMW. Okay, maybe “accepting” is more accurate than “understanding.” At least she was able to see that the end result was worth it out on the track!

We probably won’t be back on the track for a while, as I need a break from wrenching. But I guarantee you that the Porcubimmer will be on the track again, in some form or another! This entry was posted on Sunday, August 23rd, 2009 at 8:51 pm and is filed under Uncategorized. You can follow any responses to this entry through the RSS 2.0 feed. You can leave a response, or trackback from your own site.