Colin Chapman would be proud

No news on fixing the car yet, but in the meantime I had been curious about how much the car weighed in race trim. So I towed it down to a local moving company and put it on the scales.

Right after we bought it in San Jose last year, we took the car to a scale and it weighed 2700 lbs bone stock. Yesterday it weighed 2340 lbs, which included the weight of the tow bar used to flat tow the car (approx 35 lbs), and some other miscellaneous parts. So in reality it weighs about 2300 lbs, which includes the heavy (probably 100 lb) roll cage. That means we removed about 500 lbs from the car. I was very surprised!

On that note, big thanks to Rich for perma-loaning us the tow bar, and to my girlfriend Chrissy for loaning us her Escape to tow the BMW with. Nobody on our team has a truck or trailer (we’re borrowing them for the Thunderhill race), so to move the car around locally we took a spare front bumper and attached a tow bar to the front of the car and some trailer lights to the rear. It has worked out great, even if the Escape is a little underpowered for the job. I only wish we could record the looks of peoples’ faces when they see a prickly BMW going down the freeway.

Better now than at the track, I guess….

In our last episode, you read that our car was disabled during testing at a local autocross due a bad crank position sensor. Unfortunately that’s just the tip of the iceberg.

After towing the car back to my house, I got under the car to figure out what went wrong. I first had to remove the crank position sensor from the trans bell housing. This was a bitch of a job in itself, because the top of the sensor magnet (undamaged version seen on the right side of the photo below) had been hit by something and mushroomed, which meant I could not simply slide it out of the hole. So I ended up having to destroy the sensor magnet by using a hammer and flat head screwdriver as a chisel to get it out of the hole (and I have the scars on my knuckles to prove it). 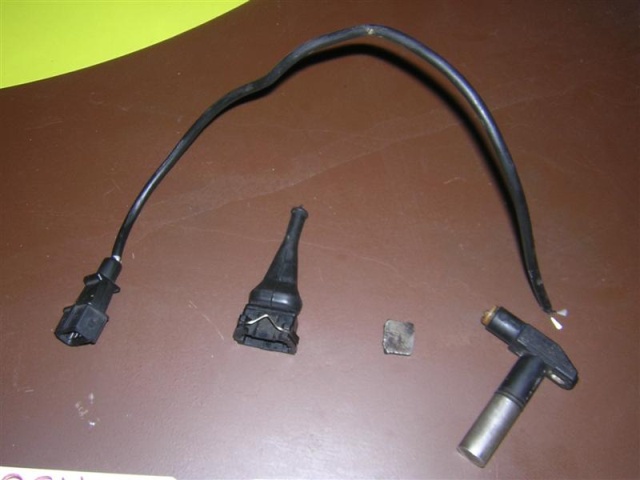 During that process, a little square chunk of metal (just to the left of the sensor in the photo above) fell out of the bell housing. I wasn’t sure what this was at first, but it will come into play later. After I got the sensor out, I was able to look through the hole to inspect the condition of the flywheel. This is what I saw: 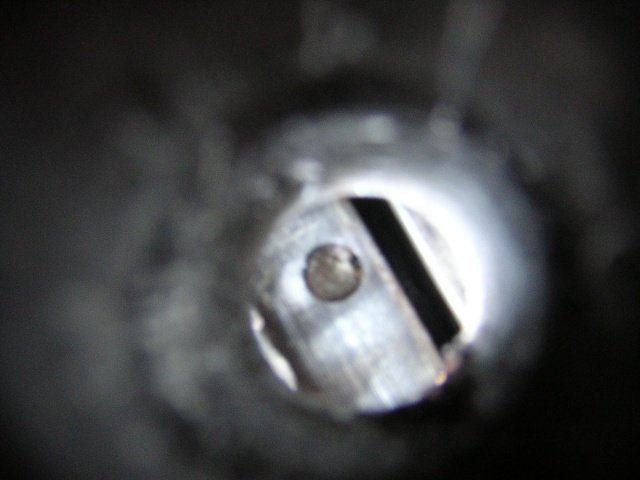 That is what is left of the “reference pin” that is supposed to be attached to the flywheel. It’s basically a metal tab that the crank position sensor detects when the flywheel is spinning around to determine the engine timing. The engine cannot run without it. Undamaged it looks like this (not our flywheel pictured): 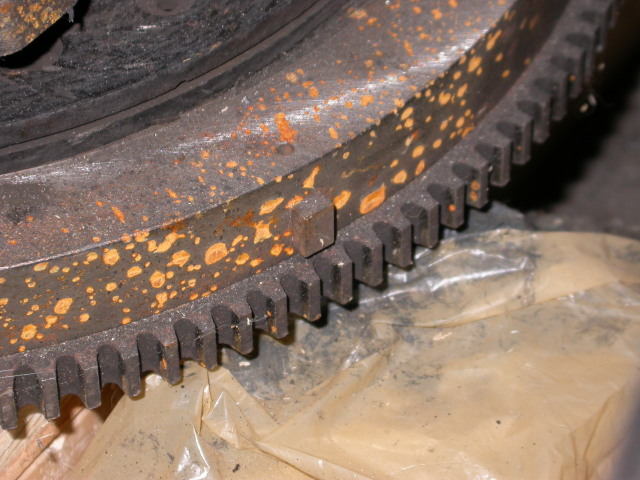 So, the transmission has to come out again. You may recall from earlier blog entries that we already had to replace the flywheel previously (after the clutch blew up) because the reference pin somehow came off the original flywheel too. To say we are disappointed and frustrated would be a great understatement, especially because we lost use of Vince’s best damn garage in town since he moved to Wyoming… errr Campo. We thought we were in the home stretch! I’m not sure when we’ll be able to fix this, but we will.

It looks like we’ll be able to drill out the hole in the flywheel and replace the pin with a bolt (you bet we’re going to weld that sumbitch onto the flywheel), but the big question was why this happened. We had only driven the car a couple miles since replacing the flywheel and clutch, but in that time it ran like a champ. We even had the engine running at high RPMs due to Vince’s constant desire to find the rev limiter while the car was parked in his garage.

I did some further research online (god I love the internet) to see if we could figure out what went wrong, when I came upon a post on a BMW message board from someone who had the same problem, and luckily he posted some post mortem photos of his parts. This was one of his photos:

That square broken off piece on the right looks awfully familiar! It appears that a piece of the release bearing broke off, bounced around in the bell housing and became shrapnel, which unfortunately took out the reference pin on the flywheel. Right before the car died at the autocross, there was a high pitched rhythmic “chirping” coming out of the engine, and now that I think about it, it sounded like a bad release bearing. Apparently the newer release bearings have a plastic housing which is less likely to fail in this manner (or at least take out other components when it does fail).

So for now, the Porcubimmer sits sadly in my garage (where I only have limited tools and hardly any space) until we find the resources to fix it. But if the clutch/flywheel were to fail, better now than at the track, I guess….

Well, this is why we wanted to do a shakedown…

Well, work the bugs out we did.  I elected to let Scott take his runs first, while I worked the course.  He got one run, I smiled as he passed me out on cone shagging duty… then he never came back out.  I spent the rest of my worker stint fretting, unfortunately with good reason.  When I got back to the pits I was told the power went way down about 2/3 of the way into the run and now it wouldn’t start.

After swapping the ECU and it still wouldn’t start, we checked for spark.  No spark.  We tested the coil for shorts and impedance, all within spec.  We checked the coil wire, which was a bit out of spec (2000 ohms when it should read 1200) but not enough to cause a loss of spark.  Upon attempting to short the coil directly to the chassis to test for spark, there was none.  Vince got to work testing the crank position sensors while Scott went off to chase cones on the course.

Multimeter testing revealed one of the crank sensors had infinite impedance.  Not good.  When we tried to remove it from the bellhousing… it wouldn’t come out.  They should just fall out.  Eventually, thanks to liberal application of Channelocks and brute force, Vince got most of the CPS back out.  Somehow the very tip of it had separated and wedged itself in the socket for it.

So, good news is the problem is easily fixed, barring making sure we are able to get the broken tip back out and not shove it into the bellhousing.  The better news is this happened now, instead of on the first lap at Thunderhill.  The bad news is I still haven’t gotten the damn thing out of 2nd gear, as I only got to drive it to Tech and back.

But it did look damn good out there (photo by David Moore):

So we’ll replace the CPS and get out to the next Solo.  Thankfully there’s two more before Thunderhill.